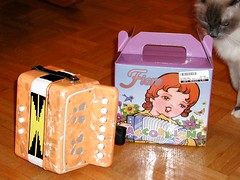 A week or two ago,

nyxie and I swung by the Ottawa Folklore Centre, the local folk-oriented music store. In the window they had these little toy accordions, and today I went back and picked one up!

These little things have a bit of a following online. I've never seen them labeled "Fiore" before -- usually they're "Hero" or "Schylling" brand. They're very well-made considering they cost $13: real mother-of-toilet-seat on wood, but with brass reeds and pretty cheap bellows. Looking around on the Web I've learned that they're made by the Shanghai Accordion Factory (!) and rebranded by whoever wants to buy a containerful.

Anyhow, it plays pretty well considering the price. It works like a harmonica, with different notes on the push and the draw. The tuning is really wet, where both sets of reeds are intentionally a bit out of tune with each other, but not consistently so, and a couple of notes are pretty much completely dry in unison, so it sounds a bit out of tune. I'm probably going to open it up and block off one set of reeds to make it play completely dry. It doesn't have a lot of air, so sounding half as many reeds will help there too.

Now that I've been playing with it for a couple hours I managed to play a few bars I remembered from a Great Big Sea album and recorded it. So far so good!

The box sort of creeps me out, though.