Here's a weird one for you: I installed Windows (XP Pro) on my laptop the other day. Yes, yes, hell's frozen over, I know. I need to work in both Windows and Unix regularly, so I had to have some compromise. Until now the compromise has involved running the Windows apps I need (Office, Notes, Remedy, MMC, mostly) either in Crossover Office or via RDP on an old P3 under my desk at work, but more and more I realized that there were a bunch of things where I could benefit letting Windows have control of the hardware, from proprietary VPN clients to games to soft phones. So I bit the bullet and set things up dual-boot, although I haven't really needed to boot back into Linux yet.

I'm satisfying the Linuxy side of the picture with cygwin, and so far that's been sufficient -- well, that plus a native EXT2 driver. Still reading my mail in mutt, still editing in vim, still IRCing in Gaim, still surfing the Web in Firefox, but it's nice to be able to sync the Blackberry, use Google Earth and Sketchup, connect over a VPN instead of an SSH tunnel to work, run MMC locally, and so on. I'm actually pleasantly surprised at how well things seem to be working, especially wifi, bluetooth and so on that were all a bit persnickety under Linux. The laptop runs 10 degrees cooler on the CPU and 20 degrees cooler on the hard drive and memory, too, which surprises me.

It's odd to have to catch up on the last four or so years of must-have software, though. If there's stuff you think I probably don't know about but should, let me know!

Other than that, not much going on lately. I took

nyxie out last weekend to Domus Cafe for her birthday. Tasty! She had a barley-mushroom-truffle "risotto" and salmon with (more) truffles, and I had a hot and cold foie gras appetizer and crispy duck. It was the first time we'd been to Domus. The decor and service were almost a little too plain -- I know that it's more of a bistro-type restaurant, but the atmosphere didn't really flatter the food compared to some other places around here I'm fond of, like the Urban Pear. Still, everything was very good.

Curling's going pretty well. I'm still only making about a quarter of my shots, but that's average from what I'm seeing. Apparently serious amateur curlers average about 50% of their shots, so it's harder than you'd think! Even championship curlers come in somewhere around 85%. In the new year we're done the instructional part of the rookies program, and it's all league play from then on. I've got a decent team who play hard but don't take themselves too seriously, and somehow I ended up being skip, so it should be a challenging few months!

Must post more often. Nag me if you see me. 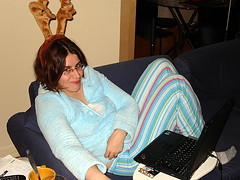