Today I stopped by the LCBO* to pick up some beer: specifically, a six-pack of Dogfish Head 60 Minute IPA [93.5; 95], which has only recently become available here. Unfortunately, they didn't have any out front even though their website claimed they had lots in stock.

So instead I picked up a few other things: 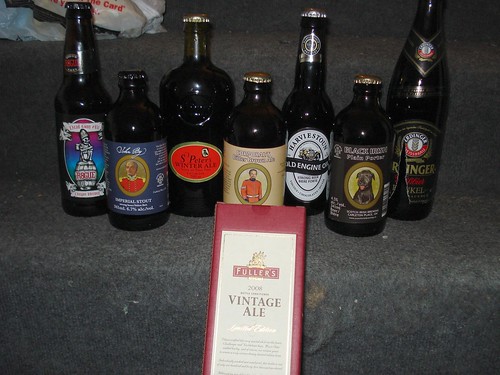 I've got:(Numbers in square brackets are the RateBeer percentile score for the style and overall respectively.)

Mmm. That should be good practice for next weekend's Cask Ale Festival (with these ales on cask) at the Victory Cafe. (Anyone here going?)

The photo, incidentally, is taken on the steps of our "beer fridge", aka "unheated rear mudroom".

* Liquor Control Board of Ontario, the provincial agency in charge of distributing and retailing alcohol in the province. They also do beer, even though the major-brewery-owned Beer Store does so too; they stay out of each other's space so that the LCBO sells the interesting beer and the Beer Store sells the Ontario and Canadian beer and the international stuff you'd buy in a 12- or 24-pack. Interestingly, the LCBO used to be a prohibitionist organization designed to make buying liquor inconvenient; now they're a huge profitable marketing machine.
Collapse