Well, this is kind of neat:

I was going through my Flickr account tonight, and I found this picture, entitled Semi-detached houses in the Annex: 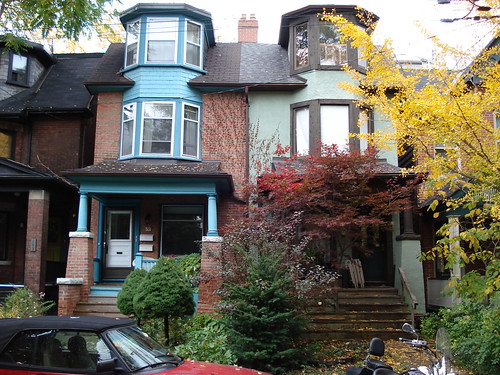 I took that picture when

nyxie and I visited Toronto in October 2007, right after I'd left the MBA, to see if Toronto was the sort of place we'd like to live. This wasn't apartment-hunting, just getting a feel for some neighbourhoods, before I'd started looking for jobs down here and before I'd ever heard of FreshBooks.

I captioned the picture, "More 'This is what it looked like' shots. We liked the Annex as a potential neighbourhood a lot."

And while we didn't move to the Annex when we moved here, we're about to move there next month! So I thought it would be neat to figure out where that house was.

I had a lot of hints: In the large version you can see that the house number is 197. The car in the picture is parked with the driver's side door at the curb, which means it's a one-way street. The sun is behind me, so I'm facing east, which in turn means it's a southbound one-way street. And the next picture in the set is of Honest Ed's taken from east of Bathurst, so I knew it was in the Annex proper, between Bathurst and Spadina north of Bloor.

So I just had to find the semi-detached 197 in the Annex that had the unusual five-sided flat-roofed bay windows. Easy enough, right? So, using Microsoft Live Maps -- which gives you a birds-eye view instead of straight-down aerial shots -- I started on the street we're moving to. Here's what I saw:

Yep! The photo is from Howland Ave, our new street, a block north of our new building, which we must have walked down when we were exploring the neighbourhood. So we probably even walked right by our new building a year and a half ago when we were thinking about the possibility of moving to Toronto!
Collapse