I was just looking through Flickr for pictures of rakusu. (A rakusu is a bib-like square of hand-sewn cloth panels worn by Zen Buddhists who have taken the Precepts. More on why in another post that sums up this past week of vacation, although I'm ahead of myself on the rakusu!), and I found a couple of things I want to share.

The back of a rakusu is white cloth, and during jukai -- the ceremony of taking the precepts -- the practicioner's teacher will write the student's Dharma name, and occasionally their lineage and often an inspiring commentary from one of the Patriarchs.

Anyhow, with that out of the way, this caught my eye: 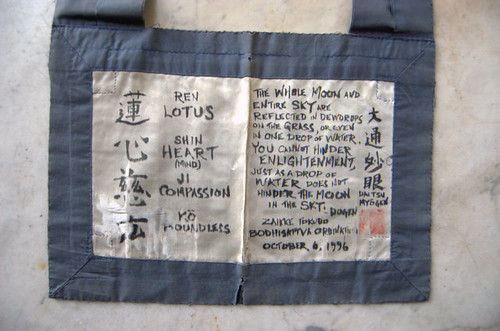 The commentary there is Dogen's, and it reads:

The whole moon and entire sky are reflected in dewdrops on the grass, or even in one drop of water.

You cannot hinder enlightenment, just as a drop of water does not hinder the moon in the sky.

The owner of that rakusu is Renshin Bunce and she has more of her rakusu on Flickr too.

And looking for rakusu got me to this page about sewing a rakusu, and there's a quote on there I wanted to record for posterity:

The most important part to remember at each moment is that, as we move ahead step-by-step, there is no where to ‘get to’, no where else we can be, nothing ultimately to achieve, no goal in all our hard work … all is just “as-it-is”.

I took this past week off, my first full week of vacation (other than at Christmas holidays) since I started at FreshBooks in December 2007. We didn't have any big plans this week because we'd taken a trip to Ottawa a couple of weeks ago, so it was just a "relax, enjoy ourselves, and get a few things done" week.

And it was an awesome one! The perfect mix of relaxing and doing nothing, fun things, and getting things done.

Last Saturday was a surprise birthday party for Corey from FreshBooks. He was surprised. After the party we wandered around King West for a bit, had a coffee at a relatively deserted Moonbean in Kensington, and made our way home.

Sunday we did some shopping since

nyxie is now on a temporary restrictive diet -- gluten-, cow-dairy-, and egg-free -- while she tracks down some minor allergies, and we ended up at the Victory Cafe for her last chance at tasty beer for the next few months.

Monday was a statutory holiday, Simcoe Day. What do you do when there's a holiday during vacation? Why, nothing, of course! So we spent most of the day on our deck doing nothing. I did manage to fix up the squirrel damage with some twisting and electrical tape.

Tuesday was busy! I got my hair cut and had lunch at Urban Herbivore in Kensington while

nyxie got a temporary crown put on her root canal. That night we went to see Fleet Foxes play at Massey Hall, which was a good show even though I'm not a fan of sit-down, balconied venues for a band like that.

Wednesday was a great day as well:

nyxie had her hair appointment, and I was meeting her afterwards in Trinity-Bellwoods Park, so I hopped on my longboard and skated down to Greenavi Cafe on Queen for brunch and coffee and a bit of reading, and then over to the park where I killed time learning to skate goofy. Got tired of that and flopped under a tree for an hour reading more, then

nyxie showed up with cute hair and we walked back to Kensington (there's a pattern here) and grabbed a late lunch of crepes at Hibiscus. Walked home via the Borden farmer's market where we bought some extra-sweet carrots, heirloom tomatoes, raspberries, tiny potatoes, and a giant live basil plant. The tomatoes and basil joined some goat cheese and balsamic in a caprese salad for dinner, and then later that night we went out to Nirvana for sangria. Mm.

Thursday was a productive day: best to cram all that into one day where possible, I say. I had a morning cello lesson (and all week I'd been getting in great practice sessions, where an hour would go by without me even noticing), and then got home, swapped instruments, and took my double bass (on the TTC!) over to Heinl's in Cabbagetown to get a little hole repaired. I was afraid they'd have to take the top off to fix it but they won't, so it came in way cheaper than I'd feared! I got home and on a lark googled "saab service toronto" to try to make some plans to take the car in for a couple of repairs I wanted done before I list it for sale, and found a garage I'd overlooked before, Jeremy's Auto/The Saab Specialist. Called them, took the car in minutes later, talked to Jeremy himself, and rushed home to get changed to go to our first formal sitting at the Toronto Zen Centre (which deserves its own post. Tomorrow, I hope!).

nyxie and I went to explore the Distillery District, which while pretty and all took longer to get to on the TTC than it took to explore. It was a short walk from there to St. Lawrence Market so we went there too, and picked up some tasty chevre and olives, and then headed home. By then the car was done -- and the possibly-$800 switch turned out to be an $8.50 relay -- so I picked that up and came home. We were going to go out later that night but were too tired. I think we're getting old.

We decided that the weekend was going to be more extra-relaxing time, and it was: we spent a couple hours at Manic Coffee on Saturday reading, then wandered back down to Kensington to find an incense holder. While there we stopped in Essence of Life, a huge and inexpensive healthy grocery store we'd managed to miss until now which I think is going to become our standard shopping spot. A long cello practice and yet another attempt to go out late at night which lost out to sleepy!

Today was laid back: to Manic again for coffee and more reading, home for another long practice session, and then to the Vic for a couple rounds. A great end to a great week. I feel so refreshed!
Collapse