So we learned from the internal medicine vet that Rasha has polycystic kidney disease. That's pretty bad news, unfortunately -- with PKD, cysts slowly take over the mass of the kidney, thinning out the capsule and thus reducing the volume of the part of the kidney that does the filtering, causing kidney failure.

Healthy (left) and cyst-filled (right) feline kidneys
It's true that animals can get by with a lot less than two full kidneys (that's why kidney transplants are possible, after all), but there's a downside to that, too: that a cat (or human) can get by on 2/3 of one kidney means that the kidneys can fail pretty badly before any clinical signs start presenting.

Rasha has 4 or 5 large cysts in each kidney, plus stones, and his creatinine level is elevated (290 µmol/L, normal range 50-200 µmol/L) which means he's probably lost over 3/4 of kidney function. He's going to start eating prescription food, and we've got a bag of Plasmalyte to start giving him subcutaneous fluids at home to keep him hydrated (although I need to double-check that with our regular vet; I'm getting mixed information as to whether or not it's too early for sub-Q for Rasha). There's no cure for PKD, so from here it's about making him happy and comfortable and trying to take as much load as we can off of what's left of his kidneys.

One thing I find intriguing is that PKD is entirely genetic, and in cats (but not necessarily in humans) it's autosomal dominant. That means that any cat with PKD necessarily had a parent with PKD, and a parent with PKD will develop cysts, since there's no way to be a "carrier". PKD is most prevalent in Persians, to the point where reputable catteries won't breed PKD-positive cats at all, especially since there's a simple and relatively inexpensive genetic test. And Persians are a permissible outcross for Birmans, and outcrossing is at least somewhat common since the breeding stock of Birmans was essentially obliterated in World War 2, which only two breeding Birmans were known to survive. 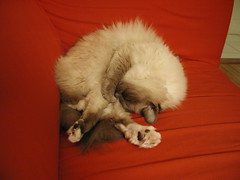 Rasha demonstrates the typical shape of a kidney.
But Rasha's history is a bit mysterious: he's a (probably) purebred Birman that I adopted from the Montreal SPCA. That means that whoever had him as a kitten probably didn't get him from a breeder, because kitten contracts with breeders usually require you to return the cat to the breeder if you find you can't keep him. That means he was probably a pet store cat, and that means that he was probably a kitten mill cat. And kitten mills wouldn't take the same precautions with their breeding stock that reputable breeders would, especially on a breed where PKD isn't at the tail end of an epidemic like it was with Persians.

So at some point Rasha's line was probably outcrossed with Persians, and those Persians were probably not from a reputable cattery that manages its stock for PKD, and the odds of the cattery that bred Rasha's line managing PKD themselves are very low, and thus we have a PKD cat.

I hadn't made the connection until now: how adopting a young purebred cat from the SPCA means that you're getting the risks of pet store purebreds. I suspect the same thing was part of the problem with Mouse too.

I'm sad that Rasha's at the beginning of the end of his life, but I'm kind of relieved that it was something genetic and inevitable. After all the uncertainty around what got Mouse sick and all the "what if we'd done something sooner" it's reassuring to know for sure that Rasha's illness wasn't a result of our act or omission.

And Rasha could still have months or years in him yet.
Collapse