I think it's finally time to retire my Blunnies. 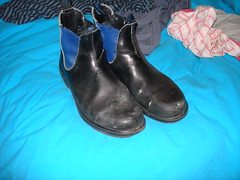 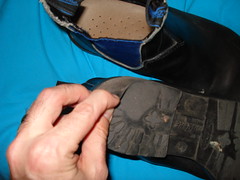 That's the second sole that's worn down and starting to come off (hm, think I supinate a bit?), and the leather has cracked in a couple of places on the left boot, presumably due to not protecting them well enough against salt last winter. (The salt on the right boot came out of it during a recent rainstorm.)

I'm sad, though, because I've had these for eight years. Granted, Blundstone themselves say that five years is the average, so I've definitely got my money's worth! But you can't get them in that style any more, with the blue elastic panels. And these ones were old enough to have been made when Blundstone still did all of their bootmaking in Australia; Blundstones have been made in Thailand and India since 2007.

But oh well. They're beyond "broken in", and they lasted a very long time considering that I hardly paid any attention to cleaning and waxing them, so it's time for a new pair.

But now I have to decide what colour I want.

I know I want leather and not suede, which brings it down to four options: black, brown-bordering-on-black, walnut brown, and red. I don't want red, but I'm not sure what I want out of the remaining three. I usually wear jeans and dark t-shirts or plaid shirts (examples).

ETA: Hm, here's the walnut in natural light. Too brown for me, I think. Also considering the dark brown, but then polishing/antiquing with black polish whenever they need a polishing.
Collapse