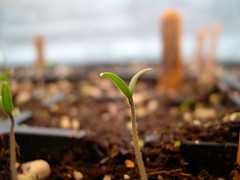 I was reading the Treeleaf Zendo forums earlier today and came across a great mindfulness practice that I thought I'd share.

Treeleaf Zendo is an "online sangha" targeted at Zen Buddhists who don't have a local group to participate in. I read (but don't participate) because it's interesting reading! Anyhow, Jundo sensei there describes a practice based on Thich Nhat Hanh's teachings that he calls "Nurturing Seeds".

At risk of overquoting, here's how Jundo describes the practice in a nutshell -- er, a seed casing:

Traditional Buddhist psychology describes our thoughts, emotions and actions as arising from a kind of "Seed Consciousness" within us, which is said to hold the "seeds" of all our emotional and thought reactions to experiences (and our actions that arise from those) ... love, hate, peace, violence, calm, irritability, confidence, fear, you name it. Whether we take these "seeds" as literally existing, or (just as fine) merely as symbolic descriptions for the workings of the mind, each serves as a surprisingly elegant image for how thoughts and emotions arise within us. For example, when we are feeling anger in a particular situation or in reaction to some person, an "angry seed" might be said to be sprouting within us. If we water that seed, and allow it to take root and bloom, anger thus blooms. However, if we can instead replace that "angry seed" with, for example, a "loving kindness seed" and a "tolerance seed" ... watering those inner seeds instead, actually summoning such emotions within ourself ... then we may react to the very same situation and person with compassion and patience instead of anger.

The entire post about the practice can be found here.

Deep gassho to Jundo for this.

[Image: youth by wemooninthewoods on flickr, used under a Creative Commons BY-NC-ND 2.0 license.]

Speaking of Zen, I figured I'd update on how things are going at the Zen Centre.

nyxie and I have been going roughly once a week, although there was a bit of time off while the Centre was closed for an intensive retreat (sesshin). I'm starting to get used to things, although I still generally feel like a total noob.

A couple of weeks ago I was finally able to attend private instruction with Sensei Henderson, and of course I managed to make a fool of myself many times over.

First, I couldn't hear the handbell signifying when to get up and line up for it and ended up getting up several handbells later. The monitor said "sorry, no more time" and I went back to the zendo, but several minutes later (and, presumably, after conferring with Sensei) he invited me back out for instruction.

Private instruction is a little intimidating, because you're meeting one on one with Sensei and he's sitting there like a Buddha in his big robes, and it's about THIS intimate:

(not our Zen centre, but the same arrangement.)

Your knees and his knees are inches apart, and thus your face and his are only a couple of feet away from each other. He's sitting on his cushion with legs crossed, and you sit in seiza (kneeling) position facing him. But he's already sitting when you come in through two doors, closing both behind you, and then turning to face him, bowing, and while he's waiting for you, you sit.

So second foolish moment: I don't usually sit kneeling, but I managed to sit with my knees in about the center of the mat, so I was a foot or so further away than I was supposed to be. I only realized this after I'd already sat down, and it felt like it'd be worse to move AFTER i'd sat.

Third foolish moment: I'd been whispering with the monitor moments before as he described the formalities of entering the dokusan room, so I was in "quiet mode". When you sit down you tell Sensei your name and your practice (counting breaths, a koan, etc.), and being in quiet mode I kept whispering. When he asked me in a normal speaking voice to repeat myself because he didn't hear me, it clicked. Woops.

The actual instruction went fine. It's not meant to leave the dokusan room so I won't go into that, and I'll go straight to the fourth foolish moment: I had borrowed a robe from the centre because I could -- sitting in a robe is a lot more comfortable than sitting with pants bunched up behind your knees -- but I'm not entirely used to robes, and I managed to step on the hem as I got up and nearly fell over backwards. I gained my composure and bowed and smiled and Sensei smiled back, cutting right through the awkwardness and embarrassment, which I guess is partly why he's a well-respected teacher!

It all comes with beginner's mind, that's what I say.

This coming Sunday is an all-day sitting, where "all day" is from 8am until 4pm or so, instead of the usual 9am to 10:30am Sunday sittings. The schedule is something like this. I'm going to treat it as a mini-sesshin if I can. I should be able to go to private instruction again, too -- I've been keeping a list of things that I want to ask Sensei about so I don't have to think of things the morning of. And I found out today that our robes, made at the centre's Costa Rican affiliate zendo, have arrived! I know

stimps has asked for pictures, but I'm not sure how easy it'll be since the robes stay at the zen centre. We'll try!