Seen on the subway on the way in today: 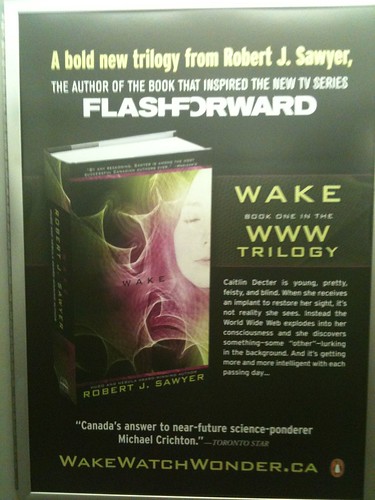 Transcription of the blurb, because it's a little hard to read -- emphasis mine:

Caitlin Decter is young, pretty, feisty, and blind. When she receives an implant to restore her sight, it's not reality she sees. Instead the World Wide Web explodes into her consciousness and she discovers something -- some "other" -- lurking in the background. And it's getting more and more intelligent with each passing day...

Ow. Where do I start? "WWW trilogy"? "Pretty, feisty"? "Some 'other'"? "Canada's Michael Crichton"? "The author of the book that inspired the new TV series"?

I'm holding off on a bigger post until the Americans are back from Thanksgiving, because I want people to see said post. So in the meantime, reruns:

Here's what I had to be thankful for this past Canadian Thanksgiving.
Collapse