I spent today at the FreshBooks office, reracking our network and phone switches and recabling everything properly. I'm particularly pleased with the results, so I am going to show you PHOTOS of the process.

When we moved into this office, we had about 30 people. The folks we bought the phones from did the rack cabling which was adequate. But then we started hiring more, and suddenly we had to buy another phone switch and another 48-port network switch and the cables started building up and things were getting bad. Here's our telecom/network rack as it looked first thing this morning, before I started fixing things: 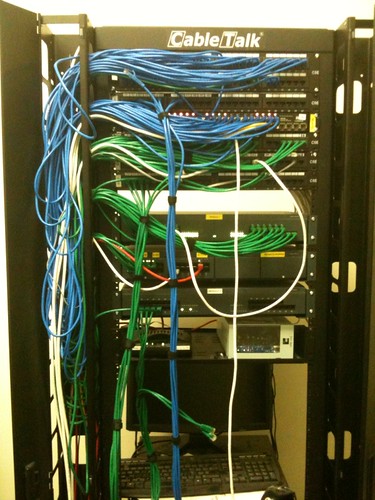 As you can see, every cable was on its own, and everything was too LONG, and some things had had to be lowered at some point so cables were coming through the wrong slot in the cable manager on the left. (The cable manager on the right was new, purchased for today's project.) You can also see that the new phone switch, right above the shelf, was pretty much unused. The new network switch was racked at the bottom of the rack, but hadn't been touched since.

So today I hand-labeled 120 or so 5' network cables, and bound them all up with seven velcro straps each into bundles of 6 -- because the patchbays at the top are grouped by six -- and rerouted every cable on there, and moved all the switches around so that the cables would have slightly longer runs and thus less folding back on themselves. But mostly it involved taking things like this:

But after all that reracking and recabling and labeling and bundling, I ended up with cable tray doors that close, and a rack that looks like so: 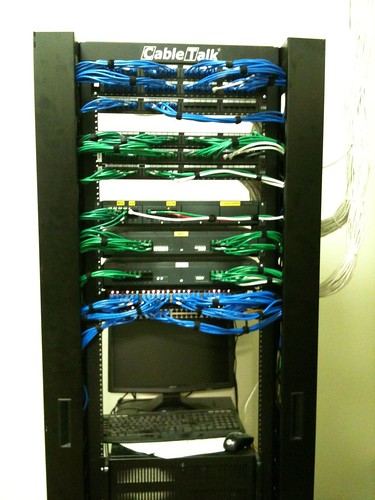 ... and 68 phone ports all of which had the wrong extension on them. But that just took a couple of trips around the office to reassign every. single. extension. on the phone switch to get things right.

But everything is cabled up now, and since the cables are all labeled by patchbay port and the switch and phone switch ports are reassignable if necessary, there shouldn't be any need to move a bunch of cables around, just adding more as we gain more capacity. (I still have 21 phone ports and probably 28 network ports left, and plans for 16 more seats in the next phase of expansion. Although now I'm thinking that it might have been better to put a phone and network switch over in the space we'd expand into and just run an uplink back to the server room, but meh.)

So I am pleased with the results given the constraints. Things I have learned for next time: Not much, really, other than to run the cables, then bundle them. Things I wish we'd done when we did the first install: leave more slack in the runs from the wall jacks to the patchbay so I could move the patchbays around. Put the switches up with the patchbays, with horizontal cable management and 1' or 3' patch cables, instead of doing the long-way-around runs we have. Buy stackable switches. (I really wish I'd bought stackable switches. I hope the inter-switch traffic isn't too much. I wonder what the backplane speed of a Linksys small-business gigabit switch is, though?)

ETA: Turns out the backplane speed of a Linksys Cisco SRW2048 such as we have is 96GB, but it also turns out that I can do link aggregation if one uplink port is insufficient. 2-4Gbps between switches ought to be plenty, I figure, if 1Gbps isn't, but I can even do up to 8 if necessary.
Collapse