Make my funk the P-Funk

Last night at Bluesfest: George Clinton! George and his P-Funk All-Stars put on a great show last night despite a smallish and subdued crowd, half of whom who have apparently never seen George Clinton! Judging by the people around us and the SMS messages on the big screen beside the stage, a significant minority of the crowd mistook “Doo Wop” Shider, diaper-clad P-Funk guitarist and vocalist, for Clinton, who came on stage around the third or fourth tune. There was a noticeable round of mumbling confusion when Clinton finally appeared. But it was a good show with no lawnchair issues. 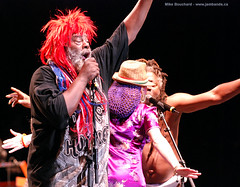 The great part about George Clinton is that it’s so unrehearsed. Everyone on stage — and there’s a lot of them — is just up there playing (or perhaps strutting around in a pimp outfit, but it’s P-Funk). I think Ottawa is probably the whitest city I’ve ever watched funk in, though. Easily two-thirds of the crowd was hardly moving at all, and I think Clinton got annoyed a couple times after trying to get the crowd screaming and dancing.

(And about that screen: You can send SMS messages to a short code to have them appear on a ticker at the bottom of the video screen beside the stage, and I’ve been entertaining myself by trying to get Internet memes from a certain place up there to see if anyone else in the audience returns with related ones. I tried but could not get SO I HERD U LIEK MUDKIPS last night, but I did get a LOL WUT, a POOL’S CLOSED DUE TO FUNK, and a SHOE ON HEAD! up, the latter of which inspired a DO A BARREL ROLL and a A CAT IS FINE TOO from someone else in the crowd. I am determined to get MUDKIPS up there by week’s end.)

As a study in contrasts, tonight we’re seeing Cat Power on the smaller Rogers stage at 8. It’s always easy to get right up to the Rogers stage so that should be a good show providing she decides to perform at all, which is always a question with Cat Power, although she’s apparently much better about it now than earlier in her career.

(Speaking of contrasts, immediately before George Clinton was Randy Newman, who I wouldn’t have gone out of my way to see but who was fun to listen to anyhow. When he wasn’t playing tunes that scream “Randy Newman”, he actually reminded me a bit of Dr. John, which is always a good thing.)