That is not what you do at a White Stripes show

When Bluesfest kicked off at Lebreton Flats on July 4, organizers allocated space for people who brought their own chairs and wanted to stay seated.

But on Sunday, during the White Stripes performance, the area was flooded with boogying fans, and organizers realized police would be needed to keep the area lawn-chairs-only throughout the festival, which runs until July 15.

Never mind that there weren’t even any signs about a lawn-chair area on Sunday. But boogying fans? Someone at the CBC decided that “dancing” wasn’t good enough and that’s all they could come up with?

However these people at the Jimmy Vaughan show on Thursday are clearly not boogying: 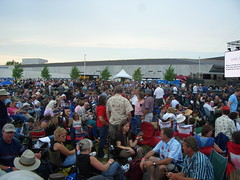 Background on the lawnchair problem here. Photo by Jessica — enlarge to see how stupid the lawnchair situation was at the beginning of the festival.