Well, I suppose I’m due a post, eh? It’s been a whirlwind, so I’ll quickly skim over everything.

I’m in Toronto! I got here on Saturday morning with Candice. We spent the weekend seeing apartments — 6 or 8 on Saturday, and then two on Sunday, staying at the Holiday Inn on Bloor at St. George. Most of the apartments we looked at on Saturday were roughly along St. Clair around Avenue or Yonge. We found some, and nearly went for one that would have stretched our budget quite a bit — until we saw this!

So Sunday we started out a little discouraged. And then we saw The Apartment, which I’ll talk about in a second, and then another one that was just as cute but up at St. Clair and Dufferin which was deemed too far away from the subway. We went out for dinner for Candice’s birthday to Coco Lezzone in Little Italy, which was good but not spectacular. (We’d forgotten to account for the difficulty in finding good dining on Sunday night here.) And then before we went to bed Sunday night I emailed about The Apartment.

Let’s talk about The Apartment for a moment: tonight I signed our lease! We now have an apartment (well, for January 1, but I have the keys) on Delaware Avenue, just west of Ossington and just south of Dupont. It’s right near here. 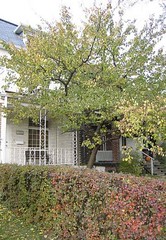 It’s a cute, medium-sized 1-bedroom on the main floor of a house, with hardwood floors, glass block walls, a giant kitchen, and a freakin’ backyard. How great is that? It’s two blocks from Ossington station, and not far from the Dufferin bus that will take me straight to the door at work. The photo of the house at right is linked to a Flickr set of the apartment, as yanked from the Craigslist ad that we found it with.The only downside: street parking, but there seems to be lots of room on that block alone whenever I’m over there.

Anyhow, back to the timeline: On Monday morning, I left the hotel and drove straight to FreshBooks World Headquarters, up on Dufferin just a bit south of Lawrence. The first day was a little bit hairy — not quite sure what I was expected to do, my manager was in interviews for most of the morning, I was stumbling around OS X for the first time ever, I was thinking about missing Candice, and I hadn’t yet seen the place I would be living for the next two weeks! But even then it was fine. Day Two felt like a “first day”, though, so the hairiness is irrelevant now. Days three and four had me doing a bunch of email support (best way to learn the product!) and finding my way around a bit more, and things are coming together pretty well.

I think it’s going to be a blast there. My coworkers are smart and a lot of fun and we seem to have much in common, and everyone, employees and customers, are really excited about the software. I’ll have plenty of interesting projects once I get up to speed on the sysadmin side, and I’ll have my fingers in a bit of the dev side as well from the sounds of things.

(I should’ve taken some pictures of the office. Drat. Also, I like OS X a lot, and need to find a way to get Candice and I MacBooks.)

Let’s see, what else? Until the new year I’m staying in Mike McDerment’s place, near Eglinton and Mt. Pleasant. Easy drive in, apartment to myself, lots around it. I’m driving back to Ottawa every weekend, and am going to be there over the holiday perineum, to see Candice and help pack up the apartment. Went over to Dan’s to have a couple beers Tuesday night, was nice to socialize a bit, but found out just before I left that there was no beer — so went around the corner from Mike’s to the Granite Brewpub, who offer growlers of their beers to go. Their Peculier was just right.

All in all things have been overwhelming and exhausting and awesome.

However, today I left my gloves at the Future Bakery (at which I had their all-day breakfast for dinner tonight, $7 for omelet, toast, home fries, fruit, and coffee). Oh, well. Can’t have everything go right, I guess!