This morning’s double take: Last night before I left the office, I sent mail to a few coworkers and a few Toronto friends asking for recommendations for DSL and VOIP providers. This morning I had recommendations from a bunch of people I knew, and one person I didn’t. Why one person I didn’t? Because one person I asked didn’t know, so they asked Mark Evans, who also didn’t know, so he asked Rob Hyndman, who forwarded my question on to this guy (who’s on the board at TorIX), who got back to me directly.

Perhaps I was onto something when I concluded that there was little to no Internet industry left in Ottawa, and that it was concentrated in Toronto.

(Of course, if you have DSL advice for me and I forgot to email you, I’m accepting it here too!) 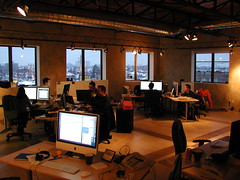 Work continues to go well. Tomorrow’s the release of a new version of FreshBooks. It’s really too early for me to be involved hands-on in a new release, but I’ll at least get to see the procedure. I also took a few photos of the office. A bit of a difference from before, eh?

Other than actual work time, I’m pretty much ready for these two “advance weeks” to end. I need to get Christmas over with so I can concentrate on the move. Things have been fine here, but I’m just ready to head home for a bit, and then to head over to new-home here. Driving has been a real pain with the big snowfall, since I still don’t entirely know my way around, roads are about half a lane narrower, and parking has been up at the air both at the apartment and at work because of snow everywhere. Once I get into the new apartment and start doing public transportation pretty much everywhere I think that’ll improve a bit.

Thursday night’s the office Christmas party, which should be fun. That forces my hand on shopping: I must pick up something silly for the gift “exchange” by tomorrow night, so I’ll brave heading downtown then. (Downtown should be easy — walk over to Yonge and Eglinton, subway down to Queen. But everything’s just a little disorienting because of the snow and the busy-ness.)