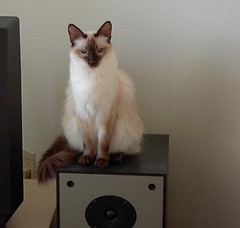 Our little fuzzy meezer Mouse has been sick for the last little while. We noticed she wasn't eating much a couple weeks ago before our trip to Halifax, and they found an infection and severely elevated bilurubin (liver) levels. She fought hard at first; we hospitalized her during our trip, she was eating ok, had ultrasounds done when we got back, and had lots of antibiotics and liver pills for her, and her bilurubin levels had come down a little. 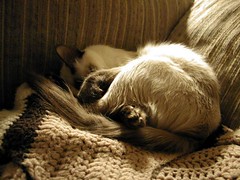 But in the last couple days she'd stopped eating again and was clearly not doing well. We took her in to the vet last night for bloodwork, and even with an appetite stimulant she didn't eat anything overnight or this morning. The vet called this morning and told us that things weren't looking good; her bilurubin was way up again, and her kidneys weren't doing well either. 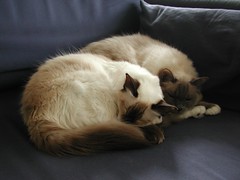 We had learned during the previous ultrasound that she only had one functioning kidney; her left one just didn't develop when she grew up. So the odds of her getting through the weekend were very low. She spent last night curled up on the bed, wobbly on her feet whenever she tried to change positions. She's always had a weak immune system. When I adopted her in 2002 she'd been in a foster home instead of the shelter because she just wouldn't thrive in with all those other cats. 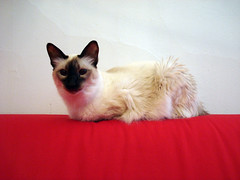 We didn't want her to have to spend her last days alone in a cage at the animal hospital, so we had her put to sleep this morning. The vet had suggested that when she called this morning, even without knowing she was only running on one kidney in the first place, so I think we made the right call, but it was still a really hard decision. She slept with us last night, spending half the night curled up behind my knee and half of it right between us at our pillows, and we spent a couple hours this morning just saying goodbye, and at the vet we held her the whole time. She fell asleep with her head in my hand. 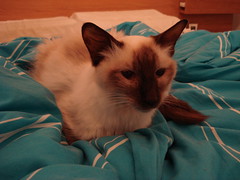 I'm going to miss you, Mousey. Thanks for being our kitty and I'm sorry we couldn't do more. 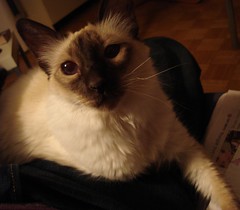 There's more pictures of Mouse and her stepbrother Rasha here and here.